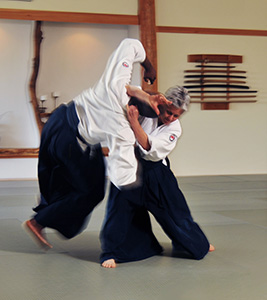 Debi started Aikido in 1995 at Florida Aikikai under Peter Bernath, Shihan. She trained there for two years before moving to Vermont where she continues to study with Benjamin Pincus Sensei at Aikido of Champlain Valley.

“I started Aikido with my teenage son thinking it would be good for him and soon realized it was good for me also. It soon became a path of not only physical training, but also spirituality, compassion, and emotional healing for me. The compassion and teaching I received in the beginning helped restore a sense of trust that had been lost for many years. Being a soto-deshi helped to ingrain a habit of intensive daily practice that continues to be a focal point in my life today.

One of the unexpected gifts Aikido has given me is the inherent aspect of conflict resolution found within its philosophy. I have been able to translate the physical skills I’ve leaned on the mat to personal conflicts in my life with amazing results. In addition to all the wonderful life lessons I’ve gotten from Aikido, it continues to be just plain fun!”